In war, there is no substitute for victory.

I came through and I shall return.

It is my earnest hope—indeed the hope of all mankind—that from this solemn occasion a better world shall emerge out of the blood and carnage of the past, a world found upon faith and understanding, a world dedicated to the dignity of man and the fulfillment of his most cherished wish for freedom, tolerance and justice.

Let us pray that peace be now restored to the world, and that God will preserve it always.

Nothing would please me better than if they would give me three months and then attack here.

Let the indomitable spirit of Bataan and Coregidor lead on…In the name of your sacred dead, strike! Let no heart be faint. Let every arm be steeled.

I’ll come back as soon as I can with as much as I can.  In the meantime, you’ve got to hold.

The scale and grandeur of the Russian effort mark it as the greatest military achievement in all history.

The gallantry and aggressive fighting spirit of the Russian soldiers command the American army’s admiration.

We are determined that before the sun sets on this terrible struggle our flag will be recognized throughout the world as a symbol of freedom on the one hand, of overwhelming power on the other.

No compromise is possible and the victory of the democracies can only be complete with the utter defeat of the war machines of Germany and Japan. If you have sacrificed my nation to preserve the peace of the world, I will be the first to applaud you. But if not, gentlemen, God help your souls. The enemy knows that he must wipe out our fighters.  Once he has done that, he will be able to play football with the German people. 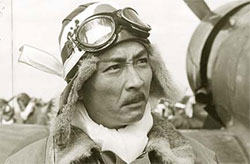 The defeat of the enemy in the Battle of El Alamein, the pursuit of his beaten army and the final capture of Tripoli…has all been accomplished in three months.  This is probably without parallel in history.

Peace is absurd: Fascism does not believe in it.

Three cheers for war, noble and beautiful above all.

[The Fuehrer] is one of those lonely men of the ages on whom history is not tested, but who themselves are the makers of history.

These men are not made of the same stuff as the Francis Drakes and the other magnificent adventurers who created the Empire. These, after all, are the tired sons of a long line of rich men, and they will lose their Empire.

--Mussolini speaking about the British in a private conversation after the Munich Agreement.

War between the plutocratic, self-seeking conservative nations [was] inevitable. [But] Italy requires a period of preparation which may extend until the end of 1942... Only from 1943 onward will an effort by war have the greatest prospects ofsuccess. Italy needs a period of peace... For all these reasons Italy does not wish to hasten a European war, although she is convinced of the inevitability of such a war.

...[W]ar alone brings up to their highest tension all human energy and puts the stamp of nobility upon a people who have the courage to meet it. War is to man what maternity is to woman. I do not believe in peace, but I find it depressing and a negation of all human virtues of man.

Fuehrer, we are on the march! Victorious Italian troops crossed the Greco-Albanian frontier at dawn today!

Blackshirts of the revolution, Italian men and women, at home and throughout the world, hear me... Italy has at last her Empire...a Fascist Empire.

I've had my fill of Hitler. These conferences called by a ringing of a bell are not to my liking; the bell is rung when people call their servants. And besides, what kind of conferences are these? For five hours I am forced to listen to a monologue which is quite fruitless and boring. Our citizens can now rejoice that a momentous victory is in the making. Perhaps we will be forgiven if we claim we are about midway to our objective.

It is the function of the Navy to carry the war to the enemy so that it will not be fought on U.S. soil.

We must not again underestimate the Japanese.

Among the men who fought on Iwo Jima, uncommon valor was a common virtue.

The battle of Iwo Island has been won. The United States Marines by their individual and collective courage have conquered a base which is as necessary to us in our continuing forward movement toward final victory as it was vital to the enemy in staving off ultimate defeat.

By their victory, the 3rd, 4th and 5th Marine Divisions and other units of the Fifth Amphibious Corps have made an accounting to their country which only history will be able to value fully.

No other island received as much preliminary pounding as did Iwo Jima.

In case opportunity for destruction of a major portion of the enemy fleet is offered, or can be created, such destruction becomes the primary task.