The United States Government's Army, Marine and Navy Departments all sponsored Artists' programs as part of World War II.  In addtion, separate programs were administered by Yank and Life magazines, and Abbot Labs.  All of the artists' programs worked together.

The Sacristy-Coventry Cathedral by Byron Thomas for Life Magazine 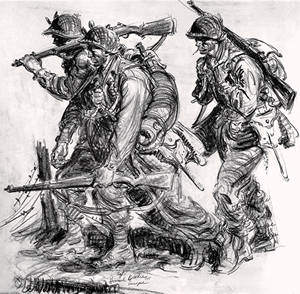 Moving Up by Howard Brodie for Yank Magazine