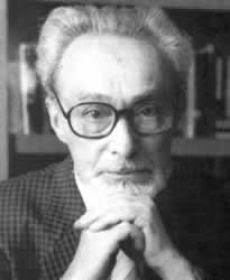 Prior to the Second World War, Primo Levi was a chemist. Today he is recognized as an author of poetry, short stories, novels, science fiction writings, memoirs, and as an Auschwitz holocaust survivor. His novel, If This Is a Man (also published as Survival in Auschwitz) is revered as one of the most important works of the 20th century. After his survival at Auschwitz, Levi spent the majority of his time dedicated to dealing with why he was not killed. “The worst survived, that is, the fittest; the best all died," he said. Levi apparently died at his own hand in 1987. Levi was prone to believe that anti- anti-Semitism is a bleak reality of culture, and not necessarily an invention of the Nazis, thus seeing a “paradoxical analogy between victim and oppressor.”

I would like to believe in something,
Something beyond the death that undid you.
I would like to describe the intensity
With which, already overwhelmed,
We longed in those days to be able
To walk together once again
Free beneath the sun.

Translated from the Italian by Brian Swann and Ruth Feldman

The Girl-Child of Pompei

Since everyone’s anguish is our own,
We live ours over again, thin child,
Clutching your mother convulsively
As though, when the noon sky turned black,
You wanted to re-enter her.
To no avail, because the air, turned poison,
Filtered to find you through the closed windows
Of your quiet, thick-walled house,
Once happy with your song, your timid laugh.
Centuries have passed, the ash has petrified
To imprison those delicate limbs forever.
In this way you stay with us, a twisted plaster cast,
Agony without end, terrible witness to how much
Our proud seed matters to the gods.
Nothing is left of your far-removed sister,
The Dutch girl imprisoned by four walls
Who wrote of her youth without tomorrows.
Her silent ash was scattered by the wind,
Her brief life shut in a crumpled notebook.
Nothing remains of the Hiroshima schoolgirl,
A shadow printed on a wall by the light of a thousand suns,
Victim sacrificed on the altar of fear.
Powerful of the earth, masters of new poisons,
Sad secret guardians of final thunder,
The torments heaven sends us are enough.
Before your finger presses down, stop and consider.

Translated from the Italian by Ruth Feldman

Torn feet and cursed earth,
The long line in the gray morning.
The Buna smokes from a thousand chimneys,
A day like every other day awaits us.
The whistles terrible at dawn:
'You multitudes with dead faces,
On the monotonous horror of the mud
Another day of suffering is born.'
Tired companion, I see you in my heart.
I read your eyes, sad friend.
In your breast you carry cold, hunger, nothing.
You have broken what's left of the courage within you.
Colorless one, you were a strong man,
A woman walked at your side.
Empty companion who no longer has a name,
Forsaken man who can no longer weep,
So poor you no longer grieve,
So tired you no longer fear.
So once-strong man
If we were to meet again
Up there in the world, sweet beneath the sun,
With what kind of face would we confront each other?