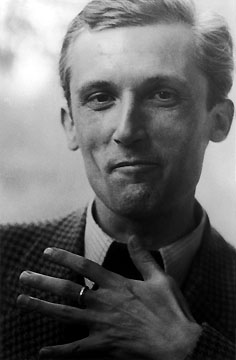 János Pilinszky was born in Budapest, Hungary in 1921.  His early education was eclectic including the study of Hungarian literature, law and art history, though he never earned his degree.  His first book of poetry, Trapéz és korlát (Trapeze and Bars), was published in 1946 and was awarded the Baumgarten Prize.  It took more than ten years before Pilinszky published another volume of poetry, Harmadnapon (On the third day).  Pilinszky was imprisoned during the war and his anti-communist stand forced him into isolation for self-imposed exile   Pilinszky left Hungary in 1960 and for ten years traveled in the United States and Europe taking part in a number of significant poetry readings.  In 1971 he was awarded the Attila Prize for his collection entitled Nagyvárosi ikonok (Metropolitan Icons).  He published several additional works up until his death in 1981.

If only I could forget that Frenchman.
I saw him, just before dawn, creeping past our quarters
into the dense growth of the back garden
so that he almost merged into the ground.
As I watched he looked back, he peered all round—
At last he had found a safe hideout.
Now his plunder can be all his!
He'll go no further, whatever happens.

Already he is eating, biting into the turnip
which he must have smuggled out under his rags.
He was gulping raw cattle-turnip!
Yet he had hardly swallowed one mouthful
before it flooded back up.
Then the sweet pulp in his mouth mingled
with delight and disgust the same
as the unhappy and happy come together
in their bodies' voracious ecstasy.

Only to forget that body, those quaking shoulder blades,
the hands shrunk to bone,
the bare palm that crammed at his mouth,

and clung there
so that it ate, too.
And the same, desperate and enraged
of the organs embittered against each other
forced to tear from each other
their last bonds of kinship.

The way his clumsy feet had been left out
of the gibbering bestial joy and splayed there,

crushed beneath the rapture and torture of his body.
And his glance—if only I could forget that!
Though he was choking, he kept on
forcing more down his gullet—no matter what—
only to eat—anything—this—that—even himself!

Why go on? Guards came for him.
He had escaped from the nearby prison camp.
And just as I did then, in that garden,
I am strolling here, among garden shadows, at home.
I look into my notes and quote:
'If only I could forget that Frenchman...'
And from my ears, my eyes, my mouth
the scalding memory shouts at me:

'I am hungry!' And suddenly I feel
the eternal hunger
which that poor creature has long ago forgotten
and which no earthly nourishment can lessen.
He lives on me. And more and more hungrily!
And I am less and less sufficient for him.
And now he, who would have eaten anything,
is clamoring for my heart.

Translated from the Hungarian by Ted Hughes