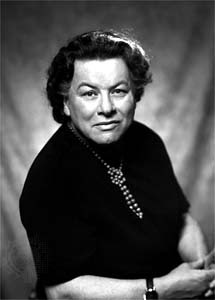 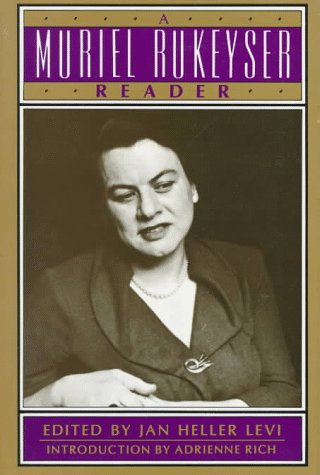 Kenneth Rexroth claims that Muriel Rukeyser was the greatest poet of her “exact generation.”  Born in 1913, Rukeyser is revered as not only a poet, but a political activist who was involved in social justice, equality, feminist and Judaic issues. Her poem, Theory of Flight, was chosen by Stephen Vincent Benet, for the 1935 publication of the Yale Younger Poets Series.  The 1938 publication, The Book of Dead, documents the Hawk’s Nest incident, a mining disaster in which hundreds of miners died of silicosis.  Her poem “To be a Jew in the Twentieth Century,” written in 1944 was chosen by the American Reform movement for their prayer books.  In addition to poetry, Rukeyser wrote a fictionalized memoir The Orgy, plays and screenplays and translated a number of key works.  She died in 1980.

For that I never knew you,
I only learned to dread you,
for that I never touched you, they told me you are filth,
they showed me by every action to despise your kind;
for that I saw my people making war on you,
I could not tell you apart, one from another,
for that in childhood I lived in places clear of you,
for that all the people I knew met you by
crushing you, stamping you to death, they poured boiling
water on you, they flushed you down,
for that I could not tell one from another
only that you were dark, fast on your feet, and slender.
Not like me.
For that I did not know your poems
And that I do not know any of your sayings
And that I cannot speak or read your language
And that I do not sing your songs
And that I do not teach our children
to eat your food
or know your poems
or sing your songs
But that we say you are filthing our food
But that we know you not at all.
Yesterday I looked at one of you for the first time.
You were lighter that the others in color, that was
neither good nor bad.
I was really looking for the first time.
You seemed troubled and witty.

Today I touched one of you for the first time.
You were startled, you ran, you fled away
Fast as a dancer, light, strange, and lovely to the touch.
I reach, I touch, I begin to know you.

To Be a Jew in the Twentieth Century

To be a Jew in the twentieth century
Is to be offered a gift. If you refuse,
Wishing to be invisible, you choose
Death of the spirit, the stone insanity.
Accepting, take full life. Full agonies:
Your evening deep in labyrinthine blood
Of those who resist, fail, and resist: and God
Reduced to a hostage among hostages.

The gift is torment. Not alone the still
Torture, isolation; or torture of the flesh.
That may come also. But the accepting wish,
The whole and fertile spirit as guarantee
For every human freedom, suffering to be free,
Daring to live for the impossible.

‹ Mitsuye Yamada--American up If Walt Whitman were a Jewish Woman ›