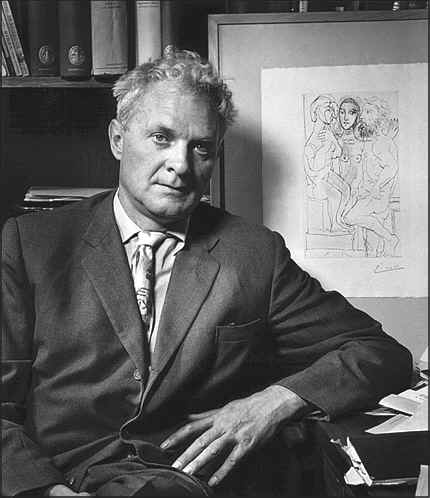 Throughout his life, Spender was a prolific writer.  Born in 1909 in London, he matriculated to Oxford and early in his career he associated with other poets such as W.H. Auden, Louis MacNeice and C. Day Lewis.  He fought in the Spanish Civil War, and during World War II, he worked for the London fire service.  He served as the editor of Horizon, a magazine he co-founded, from 1939-1941, and then of Encounter from 1953-1966.  Spender’s early poetry was closely related to social protest.  His most famous books of poetry include Twenty Poems, Vienna, The Still Centre, Poems of Dedication and The Generous Days.  He was a professor of English at the University College of London, and was knighted in 1983.  He died in 1995.

I Think Continually of Those Who Were Truly Great

I think continually of those who were truly great.
Who, from the womb, remembered the soul's history
Through corridors of light where the hours are suns
Endless and singing. Whose lovely ambition
Was that their lips, still touched with fire,
Should tell of the Spirit clothed from head to foot in song.
And who hoarded from the Spring branches
The desires falling across their bodies like blossoms.

What is precious is never to forget
The essential delight of the blood drawn from ageless springs
Breaking through rocks in worlds before our earth.
Never to deny its pleasure in the morning simple light
Nor its grave evening demand for love.
Never to allow gradually the traffic to smother
With noise and fog the flowering of the spirit.

Near the snow, near the sun, in the highest fields
See how these names are feted by the waving grass
And by the streamers of white cloud
And whispers of wind in the listening sky.
The names of those who in their lives fought for life
Who wore at their hearts the fire's center.
Born of the sun they traveled a short while towards the sun,
And left the vivid air signed with their honor.

All have become so nervous and so cold
That each man hates the cause and distant words
Which brought him here, more terribly than bullets.
Once a boy hummed a popular marching song,
Once a novice hand flapped the salute;
The voice was choked the lifted hand fell,
Shot through the wrist by those of his own side.

From their numb harvest all would flee, except
For discipline drilled once in an iron school
Which holds them at the point of a revolver.
Yet when they sleep, the images of home
Ride wishing horses of escape
Which herd the plain in a mass unspoken poem.

Finally, they cease to hate: for although hate
Bursts from the air and whips the earth like hail
Or pours it up in fountains to marvel at,
And although hundreds fell, who can connect
The inexhaustible anger of the guns
With the dumb patience of these tormented animals?

Clean silence drops at night when a little walk
Divides the sleeping armies, each
Huddled in linen woven by remote hands.
When the machines are stilled, a common suffering
Whitens the air with breath and makes both one
As though these enemies slept in each other’s arms.

Only the lucid friend to aerial raiders,
The brilliant pilot moon, stares down
Upon the plain she makes a shining bone
Cut by the shadow of many thousand bones.
Where amber clouds scatter on no-man’s-land
She regards death and time throw up
The furious words and minerals which kill life